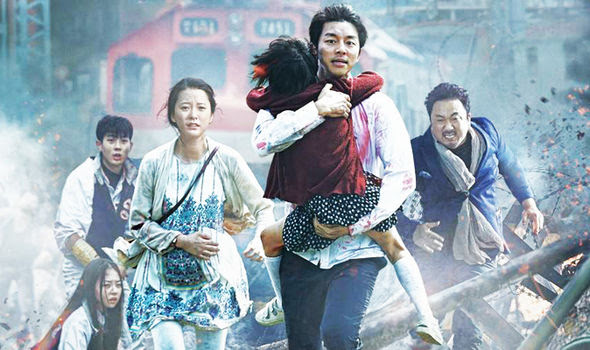 To celebrate the epic 2016 hit zombie apocalypse film Train to Busan, both the UK and US film industry have re-released the movie in time for Halloween. Soaring through Cannes Film Festival earlier on in the year, with rave reviews pushing the film to incredible heights in box offices across the world, Train to Busan has made approximately 99 million US dollars in it’s opening release, making it the first South Korean movie to reach over 10 million viewers worldwide.

With just the right amount of gore, be ready for a plethora of emotions as Train to Busan literally takes you on a journey of fear, laughter and tear jerking individual storylines. Mixed with action and a few ‘jump in your seats’ moments for the novice horror movie buffs, it is truly one of the best films of the year coming out of South Korea.

Train to Busan follows Seok Woo (Yoo Gong) a fund manager whose busy work lifestyle has driven him to divorce, and left him with custody of a daughter (Kim Soo-an) who he has also become distant with. To make the situation right, he agrees to take her on a journey from Seoul to Busan to see her mother for her birthday, but little do they know that a person infected by a nuclear plant virus has boarded the train with them and there lies the beginning of a cinematically engaging journey via the famous KTX railroad.

Kinemortophobia (from the Greek kine, meaning “motion”, and morto, meaning “dead”) is the fear of zombies.

All of the actors and actresses put on a stella performance throughout the film, in particular child actress Kim Soo-an who plays the daughter, juxtaposed with the extremely famous and talented Korean actor Yoo Gong, both were able to pull viewers in from the very beginning with their somewhat tumultuous relationship, but one that many can understand. Having such an adept young actress guiding the film for the viewers,  you would constantly find yourself in a sentimentally emotional state with her thirst to do ‘good’ deeds even when those around her fend for themselves. Her fathers character also evolves throughout the film, beginning as a protagonist you’re not sure you’re meant to like, to someone who seems to have understood the meaning of life from those around him.

Besides the two leads, there were also a whole host of supporting actors that provided comic relief, love stories, heartbreak and action to make the film a blockbuster hit.  The  pregnant woman (Jeong Yu-mi) and her husband (Ma Dong-seok) offered a comedic repertoire throughout, portraying selflessness and bravery to the utmost. Whilst the baseball star played by Choi Woo-sik partnered with Sohee of Wonder Girls gave an emotional performance when faced with those they loved and also broke the age gap to entice the younger cinema goer. And though you would believe the zombies are the antagonist, I would venture to say it is actually the boss of a leading coglomerate that infuriated most people throughout the film.

Most people would agree, zombie movies drive a fine line between cinematic genius or over the top and vulgar. But Train to Busan was not at all the latter, the right amount of rejoining broken bones, rabid feeding scenes and breathtaking make up, make it cinematic genius in my opinion. Director Yeong Sang-ho and the writers chose the correct obstacles that zombies may face, which drove it away from being in the ‘nonsensical’ category, the scenes were also not lengthened out and were able to hone in on enough gore to both scare and thrill an audience. Plus, even those that can’t watch the horror genre as a whole, would find the zombie aesthetically pleasing!

Tell us what you think in the comments, what would you have rated Train to Busan?

« What’s In Your Inspire Me Korea CLEANSE ME BEAUTY Box